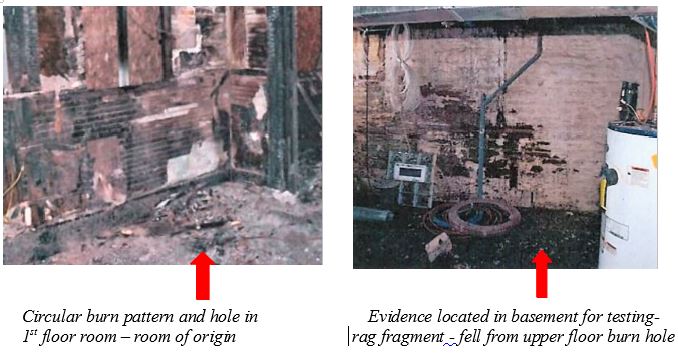 The loss originated on the first floor of the structure, resulting in a partial collapse of flooring. During an extensive dig out, the expert located a very small fragment of rag that had survived the fire after falling through the floor into the basement.  A timely chemical analysis of the fragment revealed the same chemical composition of the stain product.

There was also excellent upfront work by the adjuster who ensured the site was preserved until an expert and counsel were involved.

In January, a smaller $35,000.00 recovery occurred in western Ohio on a staining related case during remodeling. In that fire, rag fragments in the immediate origin area were believed to have been consumed in the fire. Circumstantial evidence and the ruling out of other causes resulted in the recovery.

Finally, in May a $375,000.00 settlement was reached involving a commercial building fire in Cleveland.  The insured’s structure was an adjoining building damaged by the fire.  The loss was originally believed to be related to electrical work, which was ruled out during the investigation.

Like the other losses, staining materials were located in another area of the building, and near the area of origin.  It was learned the origin area was typically where garbage was accumulated prior to being removed to the outside dumpster.

On the two larger losses, RMI was immediately on site after the fires, ensured scene preservation, interviewed witnesses, noticed and coordinated the subsequent examinations.

The three fire losses and recoveries were litigated by RMI Attorneys David Matejczyk and Dustin Smith.