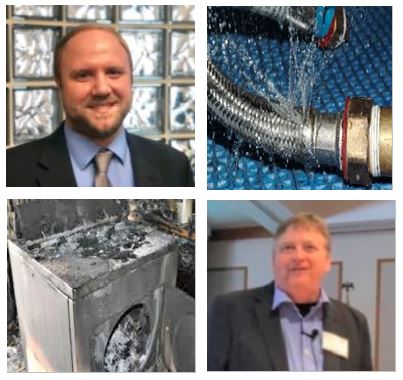 Product liability was the theme of this past month’s National Association of Subrogation Professionals Spring Conference. The conference, originally scheduled to take place in Nashville, Tennessee, was converted to a virtual conference.

The presentation by Dustin Smith and Mike Jacob reviewed common water-based product failures in both the residential and commercial context. The presentation examined current trends and failure modes in brass fittings, polybutylene and cross-linked polyethylene hoses and other plumbing products.

RMI recently resolved three dehumidifier fires with an aggregate recovery of $462,000.00 in settlements. The losses involved fires in southern, central and western Ohio.

Although the losses involved two different foreign manufacturers, all involved the same failure mode. In all three fires the dehumidifiers overheated, ignited combustible materials within the product with fire then extending to adjacent combustibles.

More specifically as to the product defect, each case involved an internal failure of the thermal protection device in the dehumidifier.

Dehumidifiers have been the subject of wide recalls in the United States. However, the Ohio Rules of Evidence do not permit the introduction of a recall into evidence to prove liability. An additional challenge is that the manufacturers involved are foreign corporations.

On all three losses RMI was involved in the early stages. The firm ensured that the proper entities (including the US supplier and seller) were on notice, scene preserved, that an NFPA compliant joint scene exam was held followed by a forensic lab examination to identity the failure mode.